In June 2015, the Veterans Legal Clinic launched the Veterans Justice Pro Bono Partnership, connecting local veterans to private attorneys who want to give back to those who have served in the nation’s defense. 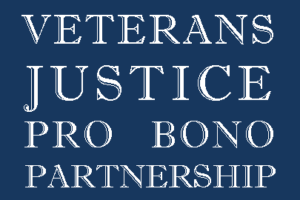 When servicemembers leave the military, they are assigned one of six characters of discharge. This discharge status affects their ability to access the full spectrum of services the U.S. Department of Veterans Affairs offers and also may impact housing and employment opportunities. The rates of discharge characterizations vary widely from branch to branch and from command to command.  In many instances, the conduct that led to a less-than-honorable discharge is the result of a mental health condition, such as Post-Traumatic Stress Disorder or Traumatic Brain Injury, that is related to his or her service. In many cases, that condition may be connected to combat or to military sexual trauma. In other cases, servicemembers may have been discharged under the now-repealed Don’t Ask, Don’t Tell policy. Hundreds of thousands of veterans are burdened by the impact and shame of a less-than-honorable discharge.

Administrative review boards within the military have the power to change a discharge status. However, many veterans have difficulty preparing and presenting an application on their own, and without legal assistance, the success rate is very low. Despite overwhelming demand, few lawyers represent veterans in discharge upgrade petitions; even fewer represent low-income veterans pro bono.

If you are an attorney interested in joining the Veterans Justice Pro Bono Partnership, contact Dana Montalto at dmontalto@law.harvard.edu.

If you are a veteran with a less-than-honorable discharge interested in free legal representation, call the Veterans Legal Clinic at (617) 390-2525 or e-mail veteranslegalclinic@law.harvard.edu.

The U.S. Army has kicked out more than 22,000 soldiers since 2009 for “misconduct,” after they returned from Iraq and Afghanistan and were diagnosed with mental health disorders and traumatic brain injuries. That means many of those soldiers are not receiving the crucial treatment or retirement and health care benefits they would have received with an honorable discharge.

By some estimates, as many as 100,000 service members were discharged for being gay between World War II and the 2011 repeal of the military’s “don’t ask, don’t tell” policy. Many were given less-than-honorable discharges that became official scarlet letters — barring them from veterans’ benefits, costing them government jobs and other employment, and leaving many grappling with shame for decades.

With the upgrade from the review board, all sorts of doors started to open. He and Molly refinanced their house with a VA home loan. Michael gets full medical care, and disability for his PTSD. He hasn’t had a drink in nearly three years. Hartnett started classes for a degree in social work.

Thousands in Massachusetts face pressing legal problems that threaten their basic necessities. Your gift to the Legal Services Center helps ensure justice for those who can’t afford legal help.